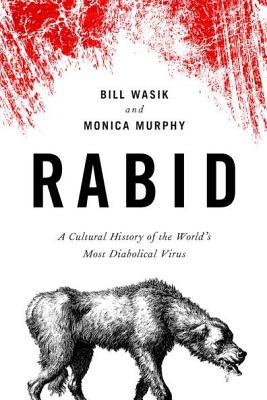 One fine afternoon, while walking with my son through the woods just down the road from where we live, we meandered our way down an overgrown path, just off the logger trail, to a hunting lodge,  where I found a sign posted outside the makeshift cabin warning of Tollwut, which means “Rabies” in German.  When I asked my father-in-law about the warning, he said it was something to watch out for in these parts of northern Bavaria where I live, just on the outskirts of the Steigerwald.  Curiosity about the disease seized me from that point on, where luck would have it that Bill Wasik and Monica Murphy, husband and wife, journalist and veterinarian, wrote a book about the disease.  Rabid: A Cultural History of the World’s Most Diabolical Virus was published by Viking Adult in 2012,  so I downloaded an audio version of the book from the Overdrive digital library to indulge my inquisitiveness.  What I found was a comprehensive and engaging look at the historical, the cultural and the empirical nature of this disease.  And it was a damn good read, too.

Wasik, a senior editor for Wired, writes jointly with his veterinarian wife, Murphy, of accounts of attacks made on hapless, unsuspecting victims bitten by all manner of creatures, ranging from dogs to raccoons to bats, some with grueling imagery.  Yet, the book does more than recount these gruesome struggles for survival; it illustrates, rather effectively, how rabies as a virus has captivated our imagination over the centuries when scientific scrutiny offered no insight on the terrible nature of this illness, where people would often mistake its symptoms for demonic possession instead.  Wasik and Murphy take the reader on an exploration through pages of medieval texts, revealing how the virus has become more than that, but an inspiration for myth and legend.  One reviewer wrote that the book was “rather slow” during the earlier chapters where the authors build up their case for this mythical association, what with their “[description of] the potential for rabies as the disease that significantly contributed to vampire and werewolf legends,” but later yields that the “pace of the book picks up”  once Wasik and Murphy begin looking at the earlier works of  microbiologists and how the book directs its focus more on the scientific, microbial aspects of the disease (Boury).  It is safe to assume that with this review being published in the Journal of Microbiology and Biology Education, the reviewer may be a bit bias toward the more scientific inclinations of the book.  I do agree with her, though, when in the end, she concludes that “this book was both educational and entertaining and worth reading” (Boury).  I feel this book is well balanced  and offers a little something for all readers about the many facets of the disease.

While the book offers clear descriptive accounts for the symptomatic features of the virus, what with hydrophobia, the fear of water that is typically associated with patients or victims of the illness, there are a few areas I feel it could have been more convincing, namely in its attempts to tie rabies to some of today’s own popular culture.  I couldn’t help but feel that the authors were trying too hard to link the virus to popular themes seen in today’s media.  Yes, it ambitiously ties the associations of the disease found in many primeval texts to such folkloric myths as the werewolf and the vampire, which are the more convincing parts of the book, but it takes this even further still by linking rabies to the zombie narrative.  As it is referenced in the book, though, the zombie is somewhat suspect in having its origins rooted anywhere in the history of rabies, a redeeming point I must give back to the authors.  Be not mistaken, I do find the book’s rational for the werewolf myth to be very informative, especially in the accounts told in the earlier chapters of the book for the dog and its role as man’s best friend and servant, but also for being one of the predominant species that carries rabies in the world, thus revealing where a deeply rooted fear for the animal comes from.  Equally, the association made to the vampire and the appearance of the bat as one of the main carriers for the disease by modern science explains some of the myth stemming out of the nineteenth century, where closely linked ties between victims who would fall ill from the bites of bats were more than abundant. A hat tip to Bram Stoker with regard to this one.

The grim accounts told in the book to illustrate these points linking the disease to its mythical counterparts are not for the squeamish, but they do serve to show how those victims could easily be seen as that of the mythical monster, transforming upon a moment’s notice into a raging, uncontrolled beast, on account of the incubation period of the virus in the body.  Losing all control over themselves, the onset of hydrophobia would drive these victims into a raging frenzy, biting haplessly into the air, uncontrollable spasms racking the body as the nerves’ synopsis fail to inhibit their receptors, causing the victim to die rather terribly without the aid of a vaccine to reduce their symptoms.  An example of what rabies does to animals — namely dogs — may be found in this KOAT Action 7 News video, reporting on a case of rabies in a Valencia county animal shelter in New Mexico.  As the report indicates, footage in this video may be sensitive to some viewers.

Regrettably, the 12 dogs in the kennel were euthanized as a result of the progressive state of the disease.  There was little that could be done for them.

Like any compelling analytical survey does, the book delivers a full account for the historical development of its topic, in this case the vaccine as it was developed in the 19th century by Louis Pasteur, a French chemist and self-taught microbiologist.  The trials and tribulations as Pasteur set to discover what he did not know about rabies at the time is one of the more remarkable parts of this book.  At one point, Wasik and Murphy account for why trained medical professionals from the 19th century  had such a profound lack of understanding for the disease, given that all the folklore and myth loosely based around the disease had undoubtedly compounded and misconstrued the truths behind the virus and its symptoms, so much so that 3rd century Grecian philosophers and their observations of rabid dogs were more telling about how rabies really was over these learned medical practitioners, some 1,500 years later.  It wasn’t until the discovery of the virus as a microbial organism that the dynamics for our understanding of rabies changed for the better.

Still, the modern world is not safe from this virus, as it kills many animals and even people from less stable regions around the globe each year.  In more remote regions  where government bodies lack an adequate infrastructure, rabies remains a deadly disease, to which even the Center for Disease Control and Prevention acknowledges its danger.  The book discusses in its later chapters several threats that occurred across urban spaces in the United States during 2008 and even an outbreak of rabies amongst dogs on the island of Bali, where “the island’s first attempt to combat the outbreak was an unsuccessful culling campaign in which 100,000 dogs were killed” (Belford).  With these incidents happening as recently as 2010, there is little doubt to the magnitude this disease can have on an isolated population, whether it be an inner-city or an island.  One thing the book does well is that it ends with a hopeful look at what is being done in rabies research.

Regardless of the breakthroughs that have happened in the way we understand the virus, though, it still poses a threat to anyone who may be bitten by a rabid animal.  If someone is not immediately treated after having been bitten, the results could be terminal, grueling and painful.  The book does not offer a cure for the disease, but what it does offer is awareness.  For all of the book’s strengths — what in its ability to show the disease’s influence over our imagination — and its weaknesses — making associations it, itself, acknowledges as border-line ridiculous — it tells a compelling story of a disease that has haunted man with his tamed natural instinct for countless years.  The book has certainly got me thinking about that walk in the woods I frequently take.  While it hasn’t deterred me from going outside to enjoy nature, I remain vigilant to the signs that are out there, knowing that deep down there’s more to this virus than its own pathological origins.