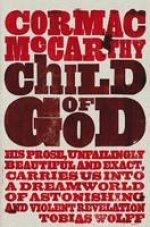 Given the way life often goes, it has been some time since I sat down with a good book and finished it from cover to cover.  My wife and I are building a home, which takes up a lot of time; we both work full-time, in order to be able to finance it; and our two kids are still at that age where they are dependent on us for nearly everything.  Add to that the fact that my son has just started going to school, and there isn’t a lot of spare time remaining in the day to read, much less to write about what I read.

That is partially the reason why I picked up this novella.  Child of God is a short novel by Cormac McCarthy, only consisting of 186 pages in the edition I own, so this has made for a short read.  Also, the story is written very simply, yet you are left thinking in the end about what in my opinion seems to be McCarthy’s way of exploring what it means to be good or evil.  If you have ever read anything by McCarthy, you may have noticed how his idea of the world and the characters in it are brutal and vulgar, full of remorse and respite for the hardships they have to endure in life.  This book is no different in that respect.

Before I can address why I think this book goes into McCarthy’s take on what it means to be evil, it is necessary to look at how the story is told.  Using a sequence of short anecdotes (usually limited to one page of text) from various non-essential characters, who bear no real significance to the story itself, as well as a series of personal reflections from the protagonist, McCarthy creates the story of a killer and how this person is driven down the path to becoming one.  The story is broken into three parts, each taking the reader to a new level in the progression of the protagonist, a character by the name of Lester Ballard.  Now, Lester Ballard is poor; with the exception of an old rifle he inherited from his father, he quite literally owns nothing. His house is auctioned away in the first pages of the story, stripping him of any dignity he may have had, which leaves him with nothing.  Add to this fact that he is poorly educated, if at all, and you have the recipe for a disgruntled man. As a result, he moves around the county, going from abandoned place to place, in order to find shelter.  He also frequently confides in other minor characters in the story, who later turn out to become his victims.  At this point in the story, though, these people provide him a form of solace in his upheaved life.

All throughout the story, subtle details are revealed to us by McCarthy, as Ballard gives more and more in to his impulsive urges.  For example, several chapters in the story recount Ballard watching into steamy parked car windows, as lovers do their thing along secluded roads in the wilderness.  In one particular moment, the mental stability of the protagonist is even called into question: “unbuttoned, [Ballard] spent himself on the fender.  O shit, said the girl.  On buckling knees the watcher watched…. For a moment they were face to face and then Ballard dropped to the ground, his heart pounding.  The radio music ended in a muted click and did not start again.  The door opened on the far side of the car” (21).  His sexual desires are also often directed towards the daughters of those minor characters who seem sympathetic to him.  The dump keeper and his five daughters, for instance, are often the subject of his fantasies, and he isn’t afraid to speak out to those girls about them.  “He had eyes for a long blonde flatshanked daughter that used to sit with her legs propped so that you could see her drawers.  She laughed all the time” (29).  Moments like these are described often by McCarthy, which eventually lead us away from the deranged fantasies he often has to the more gruesome realities of book two.

In the second part of the story, Ballard finds a car along the side of some remote access road, wherein two lovers are both found dead, the reasons being unknown. Ballard proceeds to fondle the two dead bodies for a time, then drags the body of the young girl back to the abandoned house here he has been staying.  This unique opportunity for Ballard marks in my opinion a turning point in the moral development of the character.  Unchecked by societal constraints and watch guards, he performs unspeakable acts on the dead body.  Finally, he is able to act out his desires unhindered.  There is no one here to say “no.”

This longing to sate his impulsive sexual desire, bound up within him for so long, suddenly becomes the driving point for his actions through much of the rest of the story.  The more he performs these despicable acts on his victims, the more McCarthy portrays him as something different, something bestial.  In fact, McCarthy even uses an assortment of vocabulary and expressions, like “demented hero,” “troll,” or “his mouth wide for the howling of oaths,” to validate this.  Once the derelict house he is staying in burns down, destroying all evidence of his heinous acts, Ballard even takes to living in a cave, further reinforcing the brutish and bestial behavior he has thus far been exhibiting, far removed from the society of town.  He reveals to us how this shell of a man had become twisted from the unspeakable acts he had performed on his victims.  “Ballard’s shadow veering dark and mutant over the cupped stone walls” (150).  With the protagonist’s mental stability being called more and more into question, so too do we as readers begin to see him changing, transforming into something else.

With all of the disappearances happening by the end of the third part of the book, the citizens from town decide to take matters into their own hands.  The sheriff and deputy are unfortunately unable to make any valid accusations against him, as there is no evidence suggesting that he is involved in any way, only suspicion; however, this doesn’t stop the towns people from acting on their own to impose the law.  The Southern “eye for an eye” rallies the people together into a band, and they kidnap him in hopes of finding the missing bodies.  Yet, cunning and sly, he manages to escape his captures in the tunnel systems near his cave, and later turns himself in to a state mental institution on grounds that “[he was] supposed to be here” (182).  Upon Ballard’s death, his body is used for medical research, in much the cold and calculating way he explored his victims’ bodies, an irony in and of itself, and his remains are buried in a cemetery.  The last chapter in the book uncovers the tragedy of the story, the victims of this killer.

With a story as gruesome and malign as this, what compels a reader to go to the end?  Is it the shock element of the nature of the crimes being committed, or something else?  I found the answer to this question rested in the title of the book, Child of God.  Here is a story about a killer who commits some very heinous crimes, and like all things relating to tragedy, people tend to look to Him, in the hopes of ascertaining some explanation why.  Does this book offer that?  No, McCarthy isn’t writing to validate or justify the actions and motives of his protagonist; no, in fact, I think his intentions for the story are best summarized in the following dialogue between the deputy and the sheriff:

You think people was (sic) meaner then that they are now? the deputy said.  The old man was looking out at the flooded town.  No, he said.  I don’t.  I think people are the same from the day God first made one (158).

The way McCarthy writes this tells me that he is not asking about the motives of one man, but of all men, thus addressing what must be the evil nature of man’s actions.  The story of Cain murdering his brother Abel is such a story.  It isn’t to say that Ballard isn’t any more malicious than some other killer, but merely that Ballard is no different.  He is ‘the same as from the day God first made one.’

To look at the story in this way takes the impact for the nature of the crimes committed in the book away; rather than always seeing a brutish man who preys on young people, you see a glimpse of a man who was lost, with no guidance to steer him.  Society had abandoned him, as those random encounters with the sheriff in the story often remind us.  He was a social outcast, mind you a self-inflicted one, but nevertheless, a product of his environment, and this isolation leads him to act on impulses and desire that no member of a healthy society ever taught him to repress or control.  Instead, he acted on them, much to the resistance of his victims, which moved him to use brute force to fulfill his urges.  The more he delved into this way of life, the more addicting it became for him.

This book contains the signature writing style that marks a McCarthy book, too.  Like his characters, broken and torn by the struggles they endure in life, McCarthy’s sentences are fragmented and broken, full of vivid imagery that really serve to portray the hardships this character and many others go through on a daily basis.  He uses many colloquial expressions to create the realism he strives for, to make the story real.  One example of this is “must of,” intentionally written so, as it reveals a lot about the social-demographics of the region surrounding our setting at Frog mountain.  He places details before all else, even so with the use of prepositional phrases as sentence starters and so on.  When describing a scene, McCarthy would write, repeatedly using expressions, like “In the hearth lay a pile of bricks,” or “In the patch of rheumy light a spider hung.”  This grammatical form adds to the setting and characterization to the novel quite well, while also adding to the simplicity of the writing style.

All in all, this book is worth exploring for the sake of seeing the world through a killer’s eyes.  As gruesome and vivid as the perverted nature of this one killer’s actions were, the story proves to be an intriguing dialogue about being evil, and whether being good or evil is an innate characteristic to being human.  If you are interested in knowing the answer to this,  then I recommend reading the book to make this decision yourself.  If you do, make sure you go into it with a strong stomach.  After all, some moments in the story will make you stop and wonder just how mentally sound a person has to be to even write a story like this.