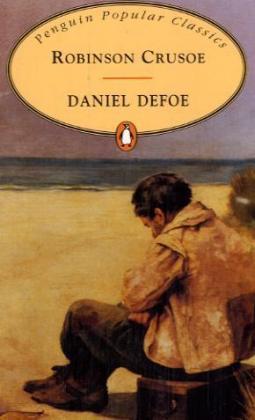 How does one review such a timeless classic as Robinson Crusoe without calling into question the justice it deserves?  Considering how well received this book has been by readers over the ages, it seems difficult for me now to tackle such a review, especially since so many people hold it dear to their hearts and memories.  After all, this is one of those books widely read even by those people who normally aren’t well read to begin with.  In fact, my first exposure to Robinson Crusoe was actually back in the day, but therein lies an injustice, if I may call it that.  We weren’t required to read the whole book, but rather excerpts from it, to which I can’t recall from which part.  So, for me to say that I had read Defoe’s seafaring adventure and to say that I knew it would be false.  Partly, because this is one of those books that people who aren’t widely read can talk about, even if they’d never read it.  Before a few days ago, I couldn’t honestly say that I had read Defoe’s work from cover to cover;  I had only read excerpts from it, hence why I decided to pick it up and give it a go.  [Beware, spoilers lie ahead if you haven’t read the book yet.]

Here is an adventure of a caliber unlike any other.  Crusoe is a man who leaves his parents behind, against their good wishes, to become a sailor.  He sails the world, becomes a slave in some Moorish country, becomes a plantation owner in Brazil — one of the Spanish colonies, at the time — and becomes shipwrecked and stranded on a deserted island for some 27 or so odd years.  His time on the island, obviously, isn’t poorly spent as one might imagine for a novel of this length, for he occupies himself with surviving off of the fruits of the land and all that is provided to him through “Providence.”  In the beginning of his extended stay, he considers himself destitute and miserable; however, his faith in the divine proves itself stronger, as he considers how well-off he is on his one-man paradise, given all of the circumstances surrounding his situation.  After all, he manages to salvage much from his wrecked ship before the sea claims her.  Once he learns the island and settles in, he tends to his daily routine, explained in such detail only attributing to an Englishman, until he stumbles upon the ghastly remains of a cannibalistic feast on some part of the beach, something he was all the while oblivious to during his time on the island. From here on out, the whole tone of the book changes, a testament to Defoe’s strength as a writer.

From this point in the novel, Crusoe becomes apprehensive and fearful of the potential fate that might await him, should he be discovered by these unknown adversaries.  The test of time proves his fears to be true, that cannibals are visiting the island and feasting on their victims, until one day, he braves the dangers with his muskets and frees one of the potential victims from a miserable doom.  A cannibal himself, whom he comes to call “Friday,” Crusoe teaches him the Christian way of living, converting him away from his heathen ways.  Loyal to Crusoe through and through, Friday becomes an asset to life on the island and begins helping with the daily chores.  The adventure doesn’t end here, though, as more circumstances arise that demand to be dealt with.  Crusoe rescues more victims from other cannibals, who know about other Spanish survivors living among the cannibal tribe (wrap your head around that one); he even rescues a doomed English captain (a fellow countryman) and his loyal first mates from mutineers who had taken over a ship.  This, in turn, ends up being his deliverance from his time on the island, ending in a well-to-do Crusoe who returns to riches and wealth saved for him by trustworthy folk, whom we only briefly learn about in the beginning of the book.

The plausibility of such a story isn’t too far-fetched, especially since many sources claim that Defoe based his novel on the stranded accounts from one Scottish-born sailor, Alexander Selkirk; however, Defoe’s faith in humanity, as revealed by Crusoe’s accounts upon his return to civilization after his deliverance from solitude, seems in my opinion a bit naive and unrealistic, considering the time period for which the story is based.  Crusoe returns to civilization, encounters ship captains whom he sailed with 27 years ago, recounts his story to them, and suddenly finds his wealth returned to him that very instance.  If this is some narrative strategy from Defoe’s time, perhaps a means of bringing closure quickly to an otherwise long story, it is beyond me and my knowledge for the writings of this time.  One thing about Crusoe that remains clear, however, is how resourceful he is in his ways.  For being a tradesman, Crusoe manages to live his time on this desolate island well to do with his goods, which is what really lies at the heart of this book — making good with what is provided to you through God’s will.  The book reads like a sermon pedestal for Defoe, to preach his interpretation of divinity onto his reader, no doubt a characteristic of any writing at the time of its publication in 1719.  If you can muscle your way beyond these religious undertones in the book, then Robinson Crusoe is a good choice for you.  Regardless, this timeless classic of endurance and perseverance during a time of hardship will always remain an exciting addition to any reading list, striving to teach the classics.